A Climbing getaway with KuKu Campers 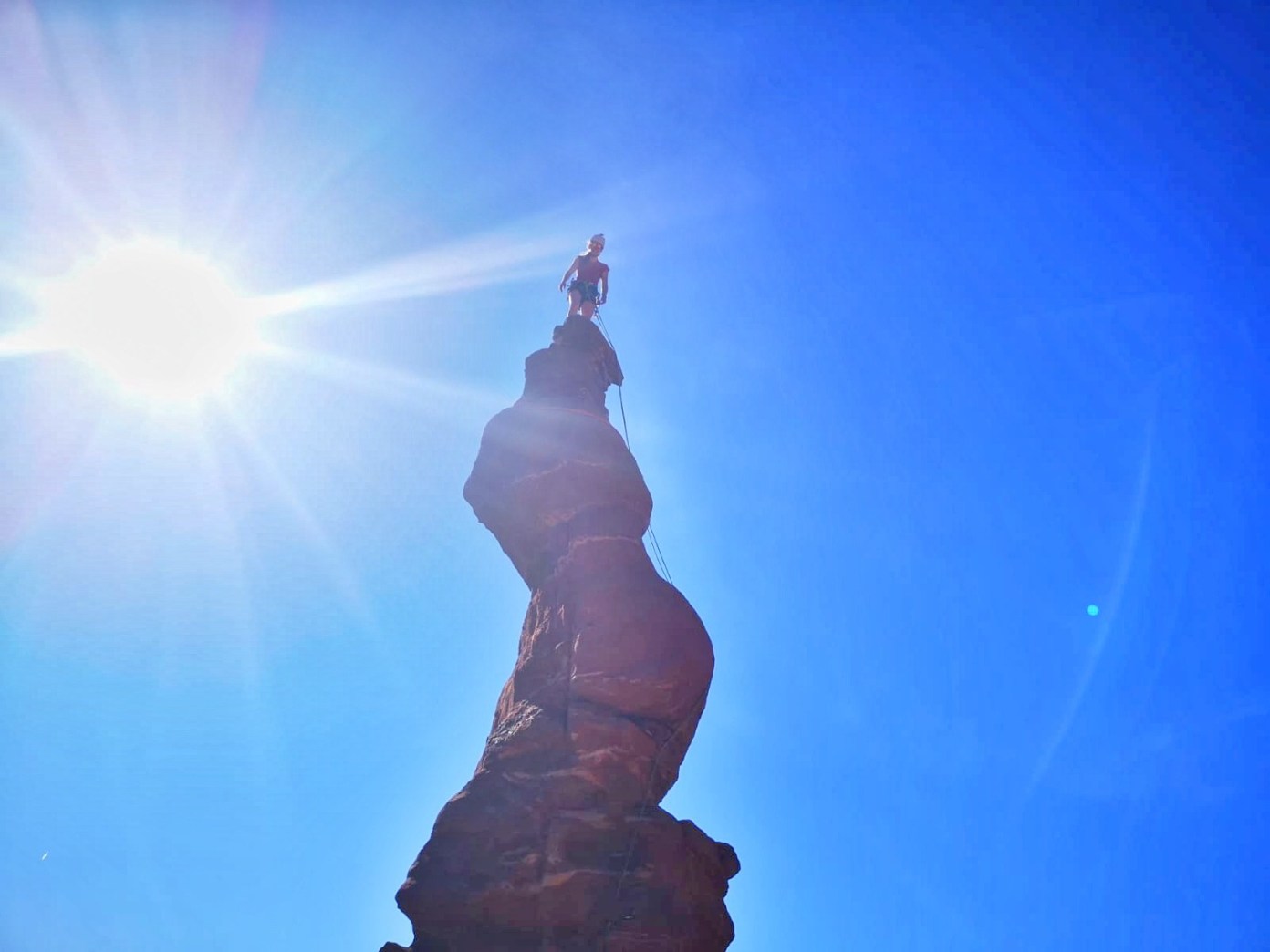 "Travelling light?" was Magnus's first sarcastic response when he picked us up from the airport, eying our two big backpacks and two full smaller packs. No, we weren't travelling light with a bit of clothing for ten days, and all the equipement we might need to go rock climbing. Because we planned a climbing road trip in Utah.

Magnus brought us to his camper rental company, KuKu Campers in Highlands Ranch, Denver. After meeting the team, they introduced a small but perfectly suitable van to us. On the side was a painting of the Terminator, which resulted immediately in a proper name for the van. We would call him Arnie.

With our new, temporary family member Arnie, we started our road trip to Utah. With only ten days, we had to make some descisions. Ofcourse we wanted to see as much as possible, but in ten days you can never see everything. So our first stop would be the outdoor paradise Moab. Where we visited Arches National Park and Canyonlands National Park.

But Moab is known for more than these National Parks. Moab also offers many great climbing spots. And with only a little bit of time, we had to make some choices.

Our first climb was going to be Molar Tower. After only one pitch, Root Canal, you get to stand on top of a massive rock. And from there you're able to enjoy the impressive view over the Colorado river. The route was well secured with bolts and the difficulty is at a grade of 5.8, which isn't too hard.

Standing on top of the Molar Tower

The route is all about chimney climbing, and the width is actually just about right. It is a fun route to test your chimney climbing skills. And as it turned out, mine weren't too good.

After our chimney experience, we were already stoked for our next adventure. Our climbing road trip thru Utah continued as we drove south on the 191 highway towards Looking Glass Rock.

This is a beautiful sandstone formation standing in the middle of the desert with nothing around it. It has a huge amphitheater and a large window. Where you can play with the echo for hours.

Before the climb we were warned about the rattlesnakes living at the base of the rock. Other climbers spotted up to six snakes at the same time. So I was't too dissapointed when it was clouded and there weren't any snakes around. But we started quickly nontheless.

In three pitches of slab climbing you'll get to the top. The grade is about 5.4. And there aren't too many bolts, but you won't need them anyway because the climbing is very easy.

View from the top into the amphitheatre

But after getting to the top, the fun is just starting. Because after finding the rappell anchor, you'll see that there's a 40 meter free rappell thru the middle of the amphitheatre.

I was kind of nervous getting my feet of the last bit of rock on the rappell, before swinging in the air for 40 meters. But the experience is very spectaculair, and I've never done any other rappell that was so adrenaline raising.

After these climbs, the weather turned, and we didn't want to stay in Moab when it rained. So we continued our climbing road trip in Utah. But the thought of one last climb never left our heads. So when, on the end of our road trip, we still had a few days left, we decided to go back to Moab. It was already on the way back to Denver, and we had some unfinished business there.

With Arnie, we stayed at the Fishers Tower Campground. We arrived in the end of the afternoon. And the peaceful area, the massive rock formation of the Fishers Tower combined with the undergoing sun left quite the impression.

Sunset on the Fisher Towers

This is maybe the most famous desert tower to climb in Utah. Before our trip, I was looking online for a challenging climb when I found Ancient Art on the Fisher Towers in Utah. After discovering this tower, I was thrilled. The pictures of all the brave climbers standing on top of this tower were spectacular.

This multipitch has four pitches. The most interesting pitch is the last one, when you climb up on the quorked tower of Ancient Art. It offers the possibility of standing on the crooked platform that's only 10 inches wide, on the top.

The route up onto the summit of the Ancient Art

After doubting our climbing skills, our trad gear and a lot of other stuff, we started the multipitch. Fortunately, the first three pitches went just great, and we got through it perfectly.

When we saw the last pitch, we were pretty intimidated. It starts with a small boardwalk without protection. Looking down at least a hundred meters on both sides. After this, you have to manouvre yourself onto the diving board with, in most cases, no other possibility than hopping onto it on your belly.

On the tower are a few more protection bolts, but some of them not so reliable. I thought it was best to just keep focus, concentrate and don’t think about where you are. Just focus on climbing, like you would climb any other rock. The exposure is what made it so scary and exeptional. And after getting to the anchor (three solid ropes wrapped around the tower) it was time to climb on the top. For the unforgettable picture to show your climbing friends and shock your family.

On top of the tower of Ancient Art

Truth be told, I think that rock at the top felt a little loose, just like everyone else said. But it's best to inspect it after you get down and got your picture, otherwise you won't go up anymore.

But this climb made our Utah climbing road trip stand out. And the climb on itself is a beauty, and not even so technical or hard. It's just the exposure of the climb on the tower that might be a bit scary to everyone.

Those ten days in Utah were incredible, the landscape is something that astounded pretty much all the time. We were lucky to have Arnie, he was the perfect family member and very reliable.
For a small van it was very sufficient, in those ten days it was easy and simple living, without having to drive a heavy van or camper (and paying for the rental costs of a heavy van or camper!). Carrying everything with us that we needed and giving us the best Colorado and Utah experience we could have wished for!